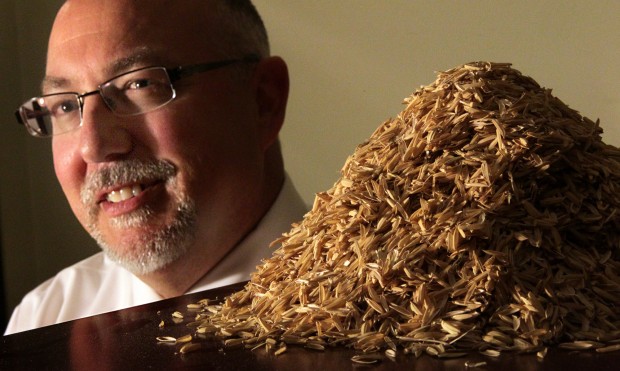 The label-conscious grocery shopper has become a more potent force in the American marketplace – and food manufacturers are paying attention, seeking out ingredients that are label-friendly and that an average person can read and identify.

That’s where a Clayton company called RIBUS, Inc., and others like it, enter the picture.

The company, which launched 20 years ago this summer, makes rice-based ingredients that food manufacturers are embracing as alternatives to synthetic ingredients with multi-syllabic names that, increasingly, are turning off shoppers in supermarket aisles.

In the past few years, the five-employee company has seen triple digit growth, with 18 patents on rice ingredients, distributors in 22 countries and customers in 40, including some of the biggest food companies in the world. Last year, the Missouri Department of Agriculture named it the Missouri Agriculture Exporter of the Year.

Steve Peirce has been at the helm of the firm since it began two decades ago. A former Monsanto employee, Peirce was approached by Neal Hammond, an inventor, who discovered a way to stabilize rice bran and extract its nutrients. Hammond’s innovation captured nutrients in a part of the grain that most manufacturers throw away. Peirce brought it to the marketplace, where it has caught on along with the “clean label” trend.

Rice is like a peanut. The outer layers are the husk, and that’s about 20 percent of the crop. We’re able to take that off and put it in the food system. When you take off that husk, you get brown rice, and when you take that off the skin – the bran – you get white rice. The bran is where 90 percent of the nutrients are. Since they throw that away or feed it to livestock, we take it and extract the nutrients from the bran. For 20 years we’ve worked with the bran, and over the last four years – and we’re patent pending – we’ve worked on utilizing the hull.

What is that technology providing?

We’re allowing 100 percent of the rice to be used for human consumption, so it’s more sustainable. But while that’s nice and it’s green and it means something to some consumers, the average consumer doesn’t see that. We make a couple of products that act as emulsifiers, that hold oil and water together. If you went to the grocery store, you’d see mono and diglycerides, or soy lecithin – not that there’s anything wrong with those. We say rice extract. It’s much more consumer friendly.

How did RIBUS get started?

My father went to church with a mad scientist down in Louisiana, and they became friends. They came to me with this invention and said: Will I raise the capital and take it to the street? I said I’d be happy to.

We deal with some of the largest Fortune 50 corporations out there. You can walk down the grocery aisles, whether its Schnucks or Dierbergs, and our ingredient will be there. Quaker Chewy Granola Bars, Snickers Cruncher candy bars. Some of the biggest spice and seasoning companies. The largest bakeries, some of the largest snack companies.

How do you explain what you say is the company’s recent growth?

Twenty years ago when I would travel the U.S. or the world, “clean label” did not mean anything to anyone. Our first customers were in the natural industry, then we would see someone in the mainstream pick up the application, then organic started catching on…. There’s a movement afoot: People want their processed food to have label declarations that sound like ingredients grandma had in her cupboard. But they’re after six- to nine-month shelf life. We’ve been able to go back to a natural source and obtain the functionality that a processor would typically obtain from a synthetic chemical.